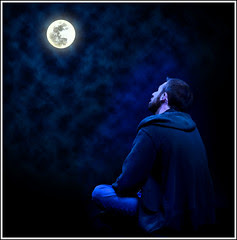 My story might be different from others on this site. It hasn't ended in atheism, or even agnosticism, though maybe that to a degree. I'm always willing to learn, anyway. I am now a rather confirmed mystic/pagan type, but my experience with Christianity was a rough one, and I thought I'd share, however it may be received.

I was raised in a pretty lax household religiously, my father only really bothering to take us to the church down the road for major holidays, and whenever he was afraid the marriage was failing. My mother was always pretty liberal, having gay friends, sending me to a gay dance teacher, but she was a huge problem later on (which I'll get to). I was a very imaginative kid, believing in Jesus because that's what Sunday school was about, but also seeing/believing in fairies and that there really was a world where the wild things roamed, and looked forward to seeing it someday. One interesting thing that never changed, however, was that I was most comfortable at prayer when looking at the Moon. That gained more relevance later in my life.

I believe the real harm to my psyche came when a zoning ordinance forced me into a private conservative Christian school (Alabama is messed up - it was either that, or go to one of the most violent schools in the country) for junior high and high school. There, I was somewhat comforted, at first, by the assembly prayers, and how we were "allowed" to talk about God, unlike in those evil public schools. Gradually, however, I learned how the "freedom" was more like expected behavior, and being different, even if you professed a belief in Jesus, was scorned.
I was berated and told I was going to hell for accepting evolution as a viable theory. I was looked at like I had three heads if I mentioned that I doubted that I would ever want to marry, or have children. Apparently, even with all his female followers, Jesus had a very specific idea of what it was to be a woman. I shocked and disgusted a teacher when I said if my dog wasn't going to heaven, I didn't want to go either. He claimed animals didn't have souls. I was mortified, being an environmentalist and animal lover.

So I tried to fit in. I figured my faith was lacking, even if everything in my soul retched and cried out against the misogyny of blaming women for all sin, especially sexual, the denial of my very natural sexual impulses during puberty, the denial of my intellect, of what I KNEW to be true, and the constant criticism of me and my convictions. I was never clean enough to understand, my questions just showed my lack of faith. I hated myself to my very core, and attempted suicide.
That didn't even wake me up to the poison dogma they were feeding me. It took something from outside myself to shake me from my zombie state. A boy, a football player, groped me sexually in the hallway at school. I was training in karate at the time, so I just reacted how I was trained - I kicked the crap out of him. I was the one nearly suspended, if not for the threat of a lawsuit and publicity. I never even got an apology from the guy. He wasn't punished.

That was definitely the push I needed to question what I was taught there. If he was allowed to be "ungodly", and I, the victim, was punished, what good was all this? What good was the school? Why was it deemed MY fault? It made no sense! How could Jesus or God allow this to happen when I was praying every night, very sincerely, to receive the wisdom, the peace that I kept hearing about and longing for? I desperately wanted to be a good Christian, but all I kept getting was dead silence, and people at school, "good Christians" all, being crueler and crueler.
It still took me a couple of years, a copy of "Mer De Noms

">Mer De Noms" by A Perfect Circle, and leaving the school for a magnet boarding school to fully leave Christianity. I tried Bahai first, loving their message of full acceptance and love, but still found any Abrahamic faith so stale. I had a friend who then practiced Stregheria (Italian Witchcraft), and asked her about it. Something about it drew me. Something finally felt like slipping into an old, well-worn pair of jeans. I read everything I could get my hands on, until my mother found out. She, for the first time, expressed an interest in my spiritual life. And she was not pleased. Apparently, "Witchcraft" was a hot button for her. She kicked me out of the house when she found my books. She screamed and disowned me.

I should probably mention her oldest friend is the daughter of a Baptist missionary who also sent her reactionary Internet-rumors about Bahai's being into black magic and sacrificing cats and babies. So, we all know she was getting GREAT information about what I was reading. Thanks to her dear friend, my mother saw anything with a pentagram on it, and flipped out. I often wonder how my mother, the same woman who taught me that homosexuals are just people, who took me to see Tibetan Buddhist monks, who spits on Reagan's grave, could have reacted to my choosing an Earth-centric, magical faith in such a way. I will say that she finally got over it, but it took years, during which she did everything to dissuade me from wearing a pentagram necklace without fear. I remember often calling her cross an "execution device." I'm sure that didn't help my stance, but I was angry.

My father's reaction was, strangely, far more reasonable. He did ask if I sacrificed animals, to which I replied "No dad, and I'm still a vegetarian." That was the end of that. He asked nothing else.

I went through several stages of de-conversion. First, I was afraid of leaving Abraham's god totally, but I finally got over that. Then I began to recognize my "hidden pagan self" over time, such as my praying to the Moon instead of at church, as well as my long-time secret belief in fairies and other nature spirits. I had other animistic tendencies as well, not limited to my firm belief that my dog does indeed have a soul (his picture is now in an honored place on my ancestor shrine). I also shortly began having dreams of a long-passed great great grandmother, who I found out, after much milking of my mother for real information, was a medium and a spiritualist. I don't know she was a reason my mother was afraid of "the occult" or not, but I don't push my mother about it much anymore.

I used to be very angry. I still have bouts of anger over the psychic abuse I suffered as a teen in a fundamentalist atmosphere, and feared for my younger sister - I still sometimes do, she is in college now, but I hope she isn't too warped. She seems well-adjusted, which is kind of a miracle, if you'll excuse the expression. Anyway, I've tried to even-out my anger with understanding, try to emulate the compassion, acceptance, and understanding I found in the Goddess. Not to say that She doesn't have her raging side, and there are times when I'm confronted with ignorance from Christians that make me want to go Kali on them, but I just release it all to that aspect. They're not worth going to jail for, in the end.

I'm not advocating my faith in place of Christianity, but I have finally found what works for me. I can honestly say I'm far happier in my path, which has gone far beyond the beginning in Stregheria, though that's where the roots still are. I'm still growing new branches, and they have spread far and wide. I'm also glad to say I'm still growing.

Thanks for letting me put down my journey so far, and I hope it isn't too disjointed. It's far from complete, but I hope it might help others.