My gift to the world: Fearless children 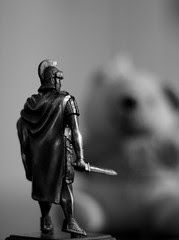 The moment I stopped believing was like waking up from a dream. My heart beat fast, may head ached, I cried. It was like the my world was suddenly spinning out of control. I was sick to my stomach. I was angry. I had truly believed in God with all of my heart. He defined my life and my relationship with him was personal. And now....

In hindsight, I guess I should have known. After I became a mother, I began to wonder how any sane parent could hit their child for acting like, well, a child. My parents never spared the rod, but they were completely sane. They trusted that the God's word was just. No one questions the Will of God. When I became a mother five years ago, I began to doubt that God knew what was best for my child. The studies showed that hitting is not the best way to raise a child. Nevertheless, I was determined to raise good Christian children.

When the first Sunday of my unbelief came, I did not go to church. I wanted to hide under a rock. I was ashamed at my disbelief. I still am. I grieve the surety that I lost. I grieve the connections I had with friends, and family. It hurts so badly that at times I wish that this too is only a dream and that I'll wake up. I hope someone understands. Some times I crave the warm fuzzy feelings I got from being at church. Church was my life. But the love for my children is stronger.

We dedicated our youngest child to the Lord last year. I promised that I would be a good parent and raise him to fear God. Who will forgive me for breaking my promise? I am still afraid of hell. It has been there since I can remember. It is really hard to forget. I am a condemned hypocrite. I have committed treason. I am worse than a sinner. It has been about 8 weeks now. I no longer have many friends, unless I reconvert. But the evidence against Christianity is undeniable.

I am committed to raising children who are not afraid to ask the questions I feared to ask. To live boldly and think fearlessly, knowing nothing is too sacred or out of reach. My gift to world has cost me dearly. I want nothing in return.

But now I must start over. My heart, though heavy, is free. Reason has destroyed my life. I am broken, but I have hope. I am thankful for those who took the time to write the truth where I could find it. Each passing day it becomes easier. The truth has set me free!