The More I Learned, the Less I Believed 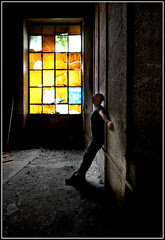 Freedom by Funky64
(www.lucarossato.com)Sent in by Jackee Gianfelice

I was brought up in a devoutly Christian household. As a child in Sunday school, I learned biblical stories (carefully selected biblical stories, to be sure) and stories about Jesus. God and Jesus were presented as loving, caring, and compassionate, with all the unsanitary parts of the bible edited out in the readings and lessons we received in church and Sunday school.

Even so, I was shocked when, at the age of about seven, I was sitting with my mother in church and the pastor began his sermon by stating, "Aside from a few cranks and revisionists, the vast majority of historians and archaeologists agree that Jesus did exist."

I was stunned. It had never occurred to me that anyone would think Jesus was real! I thought of the bible stories as superhero tales, with the character of Jesus just that--a character, there to point up the moral of the story. I quickly looked around and was doubly shocked that all the adults were nodding in agreement. I couldn't understand how they could believe in multiplying loaves and fishes, people walking on water, and people coming back from the dead, etc.--things that obviously did not happen in real life.

My immediate next thought, however, was that if they all believed and I was the only one who didn't, there must be something wrong with *me*. I must be a real sinner, a really bad person, if I couldn't even do the minimum requirement to be a good person, i.e., have faith. That was the beginning of a long period of guilt, anxiety, and self-hate that darkened my life for a long time.

Finally, in my twenties, I began to read the bible to bolster my faith. It was a big shock. Suddenly there was god in all his "glory": bloodthirsty (commanding the Jews to kill their enemies' babies by throwing their heads against rocks); manipulative (deliberately hardening Pharaoh's heart just to be able to torture his entire country with another plague); chauvinistic (telling Lot it was OK to give his daughters to be raped by invaders so that they would not demand to have sex with his sons); devious (telling the Jews to say they would spare the Philistines if the Philistines agreed to be circumcised, then, when the Philistines had had the operation and were in pain, to go slaughter them); two-faced and conniving (just read the book of Job).

And I was supposed to love this "god"...or else he would torture me in hell for all eternity. I was terrified of hell, so I tried with all my being to believe, and to love god, but always inside was the seven-year-old girl who did not believe. I tried to drown out that voice for years.

I was in my early forties when the whole thing came crashing down. Due to many reasons, I had what might be called a nervous breakdown or crisis and was diagnosed with bipolar disorder. This forced me to really face myself in the mirror and confront my life. I made some huge changes that were long overdue, and finally, with my life in order and medication controlling my illness, I undertook the most difficult task of unraveling my religious life.

The more I looked, the more I read, the more I simply thought for myself, the more obvious it became that religion (all religion, not just Christianity) was a nothing more than a convoluted, superstition-encrusted creation of human beings. It was scary at first to even entertain such thoughts, but the first view of freedom came when a woman in my support group said she was an atheist.

I had never heard anyone say that out loud, but when she did, it crystallized things for me. The god of the bible was not only a human creation but a repugnant one. My seven-year-old self had been right! It was all fairy tales. I could choose to let go of it and live in reality instead of trying to zombify myself into a "faithful disciple." At that moment I made the break to freedom.

That was six years ago, and I can truthfully say that life has been much better without god and religion. All the guilt and shame are gone, and by taking control of my own life I have improved it. I enjoy life instead of feeling burdened, and I have such a sense of freedom and possibility that I never had as a religious person.

I'm sorry this is so long, but for those who've managed to make it this far, I appreciate them taking the time to read it.