How long does it take before you feel normal again? 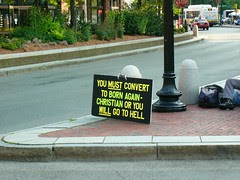 Wow, I am so glad I found this site. I am now only on my second day of turning away from God and it is so liberating on one hand, but terrifying on the second. My journey has taken 3 years, so it wasn't an overnight decision although it feels like it. I feel like I have taken my own brain back and I am giving myself permission to have my own thoughts. I am 35yrs old and I became born-again when I was 22. I was so young and naive back then. My husband and I had just broken up and I was angry, lost and hurt. My best friend had become a born-again Christian. I went to visit her and gave my life literally up. I am still in the anger phase of how many years I have lost by not living.

I spent the next years alone raising my son. I became very active in a charismatic church and got right into the gifts of the spirit and speaking in tongues, etc. I was on fire for God and nothing would stop me. During this time though, I hadn't realised that I had given up on who I was as a person. Every waking thought was will God like it if I did this? What is God's will for my life? How do I live waiting on all those stupid prophetic words I got.

I felt 'called' to go to Israel which I did with my 6yr old son all alone with a Christian group. It was the most stressful event in my life. I nearly had a breakdown during it. I was there for 3 months, and when I came back I spent 7yrs trying to work out in my head where my future lay. Should I be back in Israel? Where is God leading me? What should I do with my life?? During this entire time I STOPPED living because I was so wound up in what God's will was for my life. Three years ago I stopped going to church, but was still on fire for God. I helped run a kid's club, went to prayer meeting still and was totally submitted, absorbed, indoctrinated on God. I found there were too many questions I started to have that I couldn't find the answers for.

A good friend who was non-Christian pointed out things to me like evolution, rational logical points. Why is it that Christians stop using their brains and rational thought? Why did we dogmatically hold onto irrational ideas when plain common sense is staring us in the face? This has been the most painful decision ever for me. Its like losing your best friend. It's worse when you realise it was all a joke anyway. My brain is still living in fear of what God will think of me(even though I don't believe he is there anymore). I know it will take time for those thoughts to eventually fade away..and my own thoughts, desires, rational thinking, will come back. I feel like I have been brainwashed.

If Christianity is so freeing, fulfilling, peaceful, etc why do Christians spend every waking hour in confusion, fear of God's so-called will, pushing down natural desires, and being so smug and superior. I am so embarrassed about that side of things too. Oh what a fool I have been in all my secret thoughts around non-Christians. Well they have the last laugh now. All that time they were living, and I was not.

I feel so free. I am so thankful I could stumble across this site. It's been a lonely journey, and I had no idea that other people had made it too. How long does it take before you feel normal again in the real world. I feel like my eyes have been opened and I finally belong. I don't want to be around, hear, or have anything to do with Christians now. My stomach churns at the thought. When I tell my Christian colleagues I know exactly what they will say to me. They will try to talk me out of it and pray for me.

So theres my de-conversion story. I am glad that I could leash it out in an area where I will be heard and understood. I really needed to know that other people are doing the same, and have gone through the process and survived.